The Massif de la Bernina is the highest of the Eastern Alps and the summit of the Bernina is the 4000 most easterly of the Alps. Tormented glaciers, impressive crevasses, the "Haute-Route" of Bernina, with a peak per day, is probably one of the Alpine summits. 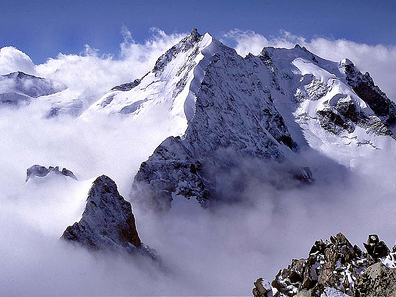 Day 1 : meeeting on the station Diavolezza late afternoon (possible departure from Chamonix) and ascent to the refuge-hotel with the same name (2973m) by cable car.

Day 2 : descent on the Vadret Pers and climb up the glaciar until the  East Ridge of Piz Palü that we can follow up by foot (3 to 4h) to the summit (3901m); Return by the same route and descent the glacier to the refuge Boval (2495m).

Day 3 : ascent (4h) of the Vadret Morterasch until the refuge Marco e Rosa (3597m) where we reduce the weight fom the backpacks, then climb up (1h) to the Piz Bernina (4048m) and back down to the refuge.